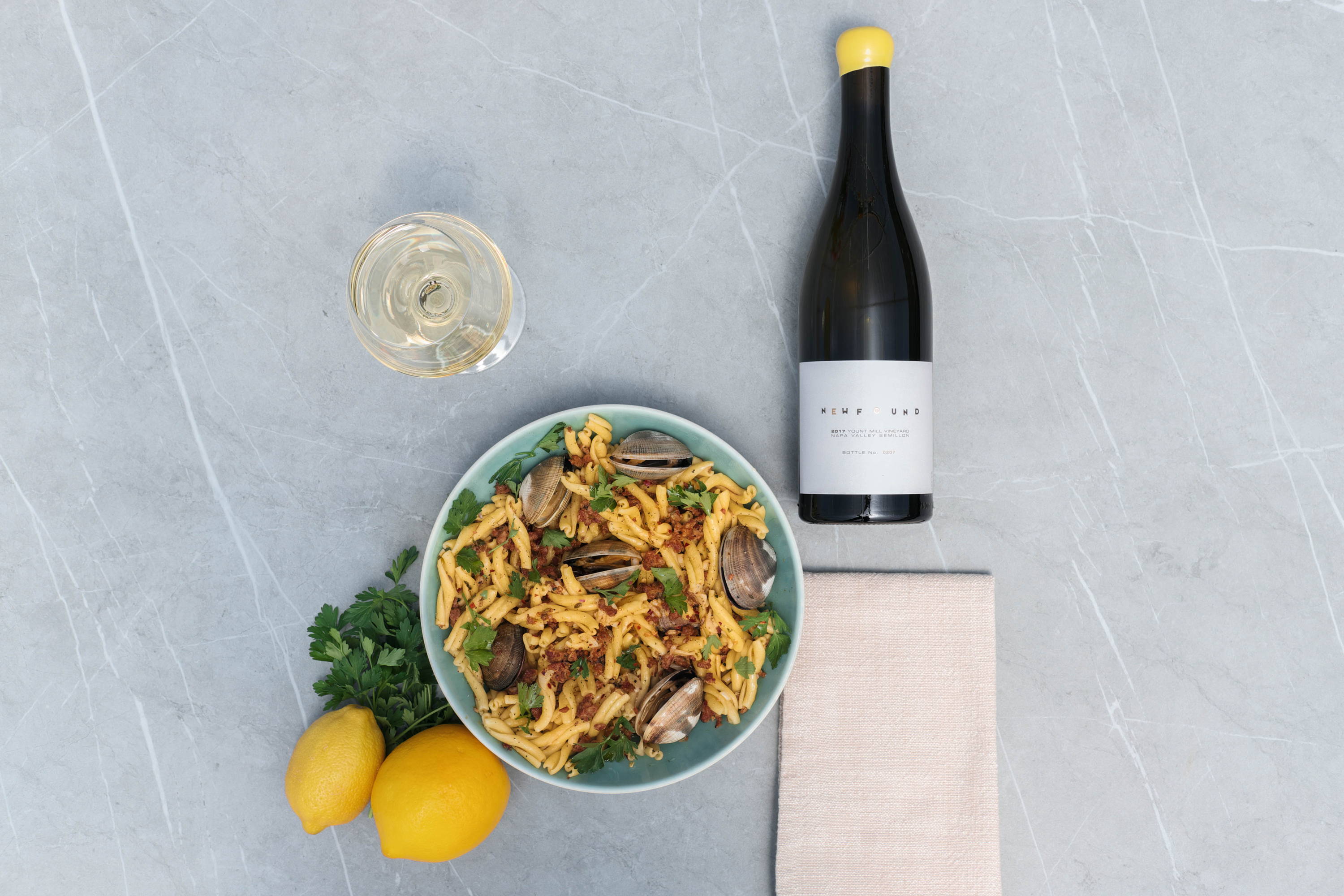 This new discovery - a Semillon from an up and coming husband and wife team in California - feels like the first glimpse of the sun shining through the trees as the season shifts from the busy productivity of spring to the relaxing long days of summer. With aromas and flavors of just-ripe peaches, a tall glass of tart lemonade, the minerality of crushed oyster shells, and just a hint of almond - perhaps your mom’s almond cookies wafting through the kitchen window to the yard - it’s enveloping in its comfort yet still fresh and exciting, like the nostalgic feeling of an entire summer vacation ahead.

With subtle flavors but a full texture and seemingly never-ending mineral finish, this wine pairs beautifully with chicken, pork, fish and shellfish, as well as summer pasta dishes.

Ever wonder what it would take to become a winemaker? Not merely an enthusiast that pays someone to make wine for you, but a hard-working, soil under your fingertips, farmer producer? Well, Matt and Audra did, and they can tell you all about it. 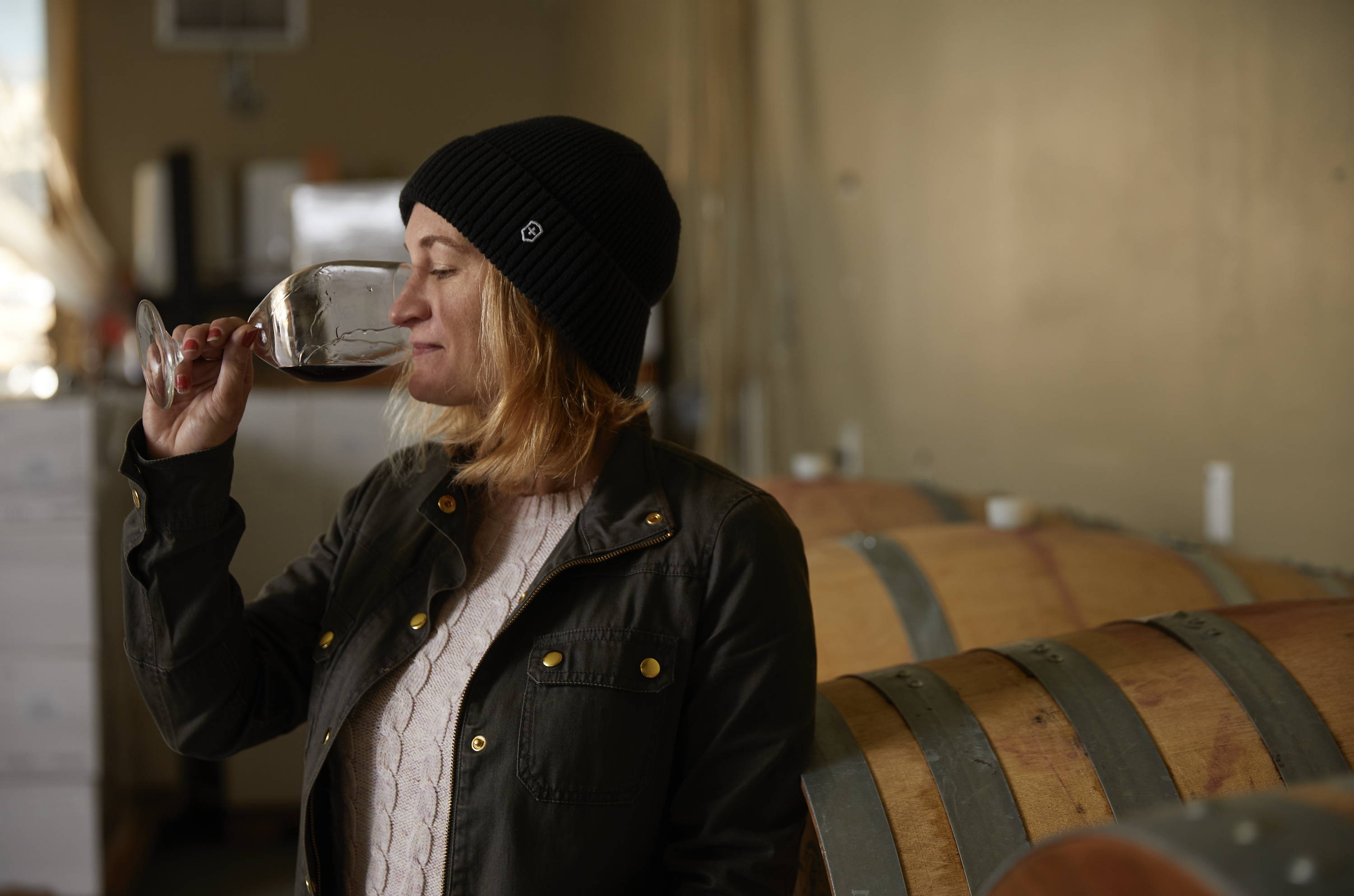 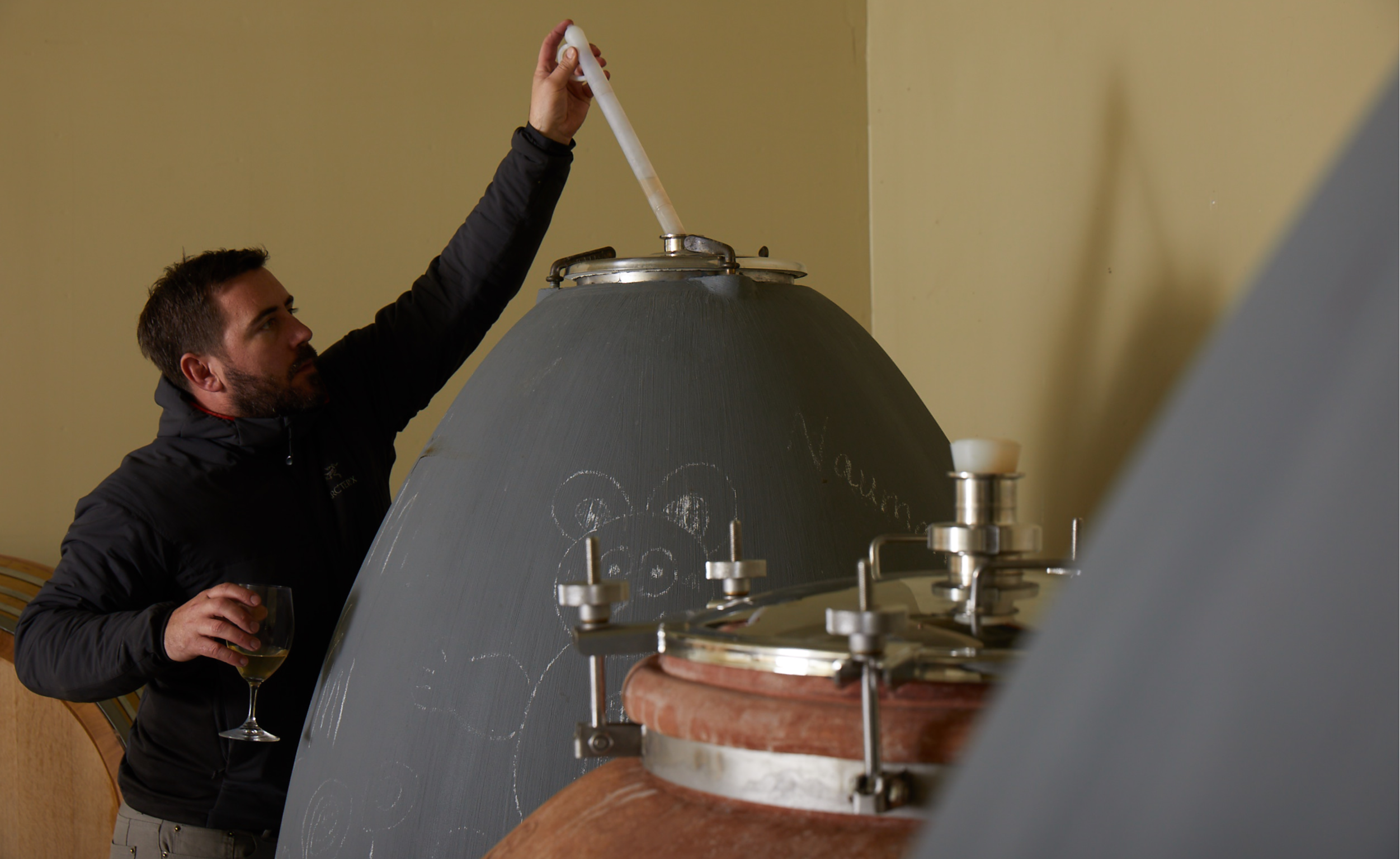 In the same way that takes equal doses of courage, optimism, and determined grit to turn a mere idea into a successful startup in San Francisco, the same could be said for new wine producers in California.

Breaking into the wine industry as a new producer is in many ways similar to the challenge of building a successful startup in San Francisco - both require a mix of courage, optimism, determined grit, and of course, a little luck never hurts. Land in Napa is so expensive these days that the idea of starting a winery like the ones many of us have visited on lazy Saturday afternoons is simply not an option for the up and comers in the industry. That model - the luxury tasting room and direct to consumer approach - is mostly the model of the already wealthy entrepreneurs - celebrities, former CEOs, investors, and so forth. But for the die-hard, roll up your sleeves, ‘I want to make and sell damn good wine” crowd, how do they do it?

First, they learn the craft by studying under the best producers they can find all over the world. These aren’t plush internships offered to CS majors at tech companies, these are grueling days of physical labor, with one chance to do something right, and the hope that your true payment for your time is knowledge and the path towards a calling. Matt took internships and entry-level jobs with producers in Napa - learning to make wine the way someone else wanted to do it while simultaneously cultivating a deep love for producing wine and getting his hands dirty in the vineyards. Living in a big house full of winemakers - both aspiring and accomplished - he fell hard for the camaraderie of it all. The constant revolving door of winemakers from around the world, each with a different approach and perspective, was exactly the type of community he wanted to be a part of.

His next step into the world of wine was both forward and backward. He returned home to Milwaukee where he ran a wine retail shop in an upscale region that allowed him to stock the shelves with his latest favorite discoveries from around the world. No longer was he surrounded (or confined) by the Zinfandels he made in California. He took every opportunity to travel to Europe on buying trips, tasting and trading stories with producers that would shape his perspective on true winemaking.

Finally, his desire to put his hands back in the soil pulled him back to California where he took a job at Failla and proceeded to work his way up (and around) from vineyard management, to production, and even to national sales. Matt wanted to learn every aspect of the business. While at Failla, a small seed was planted in his mind - what would it be like to focus on the lesser known, notoriously difficult, and remote vineyards of California? More risk and work, but potentially more reward? (Isn’t that always the case?)

Eventually, the opportunity to purchase a property in the remote Sierra Foothills fell into his lap. Was it crazy, ambitious, and perhaps naive? Probably, definitely, yet. But he couldn’t resist. All the vines needed to be ripped out, the tasting room and winery facility were a far cry from the fancy facilities of Napa, but it was his. And even better, it was a project he could dive into with his new girlfriend, Audra, whom he’d met at a wine conference in Texas. 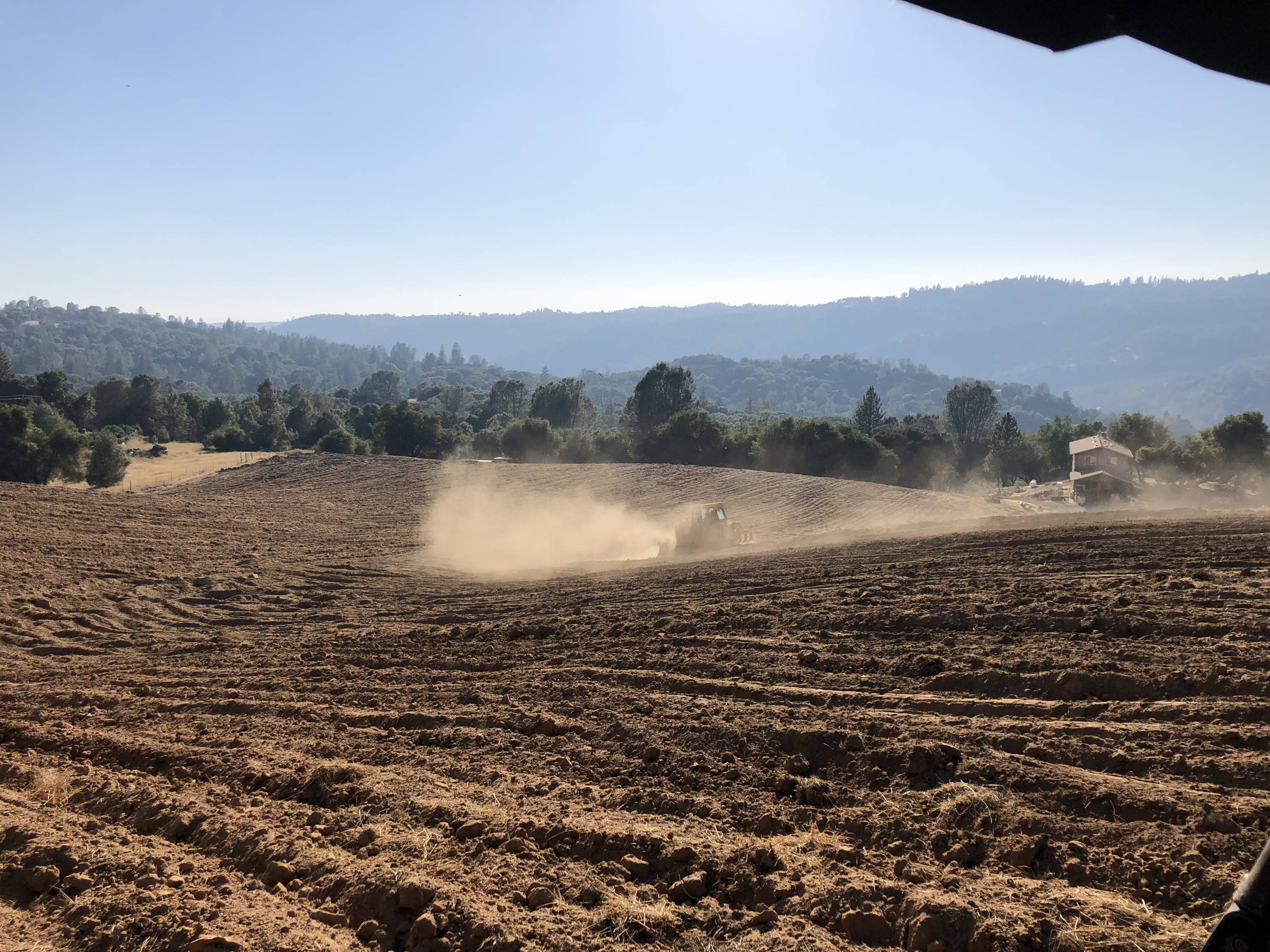 Today, Matt and Audra are inspired by owner-operated wineries all over the world. They are constantly pushing the boundaries as far as they can with their own wines, and they are focused on producing wines that are true to their place with the best possible intention. Half of the wines from their label will come from their new property in the Sierra Foothills, while the other half will come from carefully chosen family owned and organically farmed old-vine sites around California - like the Yont Mill site for this Semillon.

At the end of the day, Matt’s not interested in placing his unique fingerprint upon the wine because he’d rather show you the footprint of the vine - especially the vines he has so devotedly nurtured on his new property. Winemaking isn’t about furthering his image or unique imprint on the world, it’s about rolling up his sleeves, getting his hands dirty, and producing something he’s so proud of that he simply can’t wait to share. And if that doesn’t inspire you to follow your dreams no matter the mountain they require you to climb, then I don’t know what will! 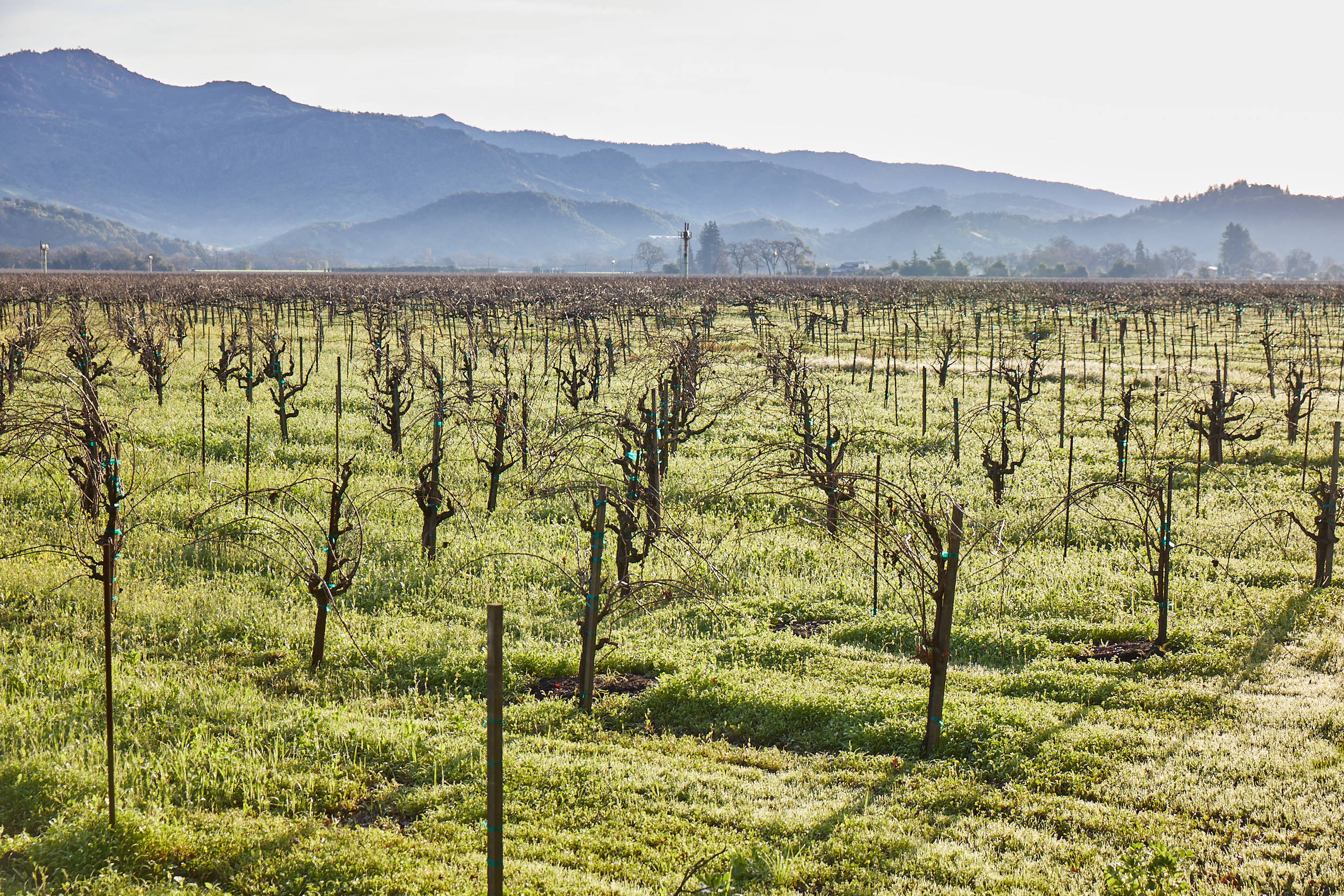