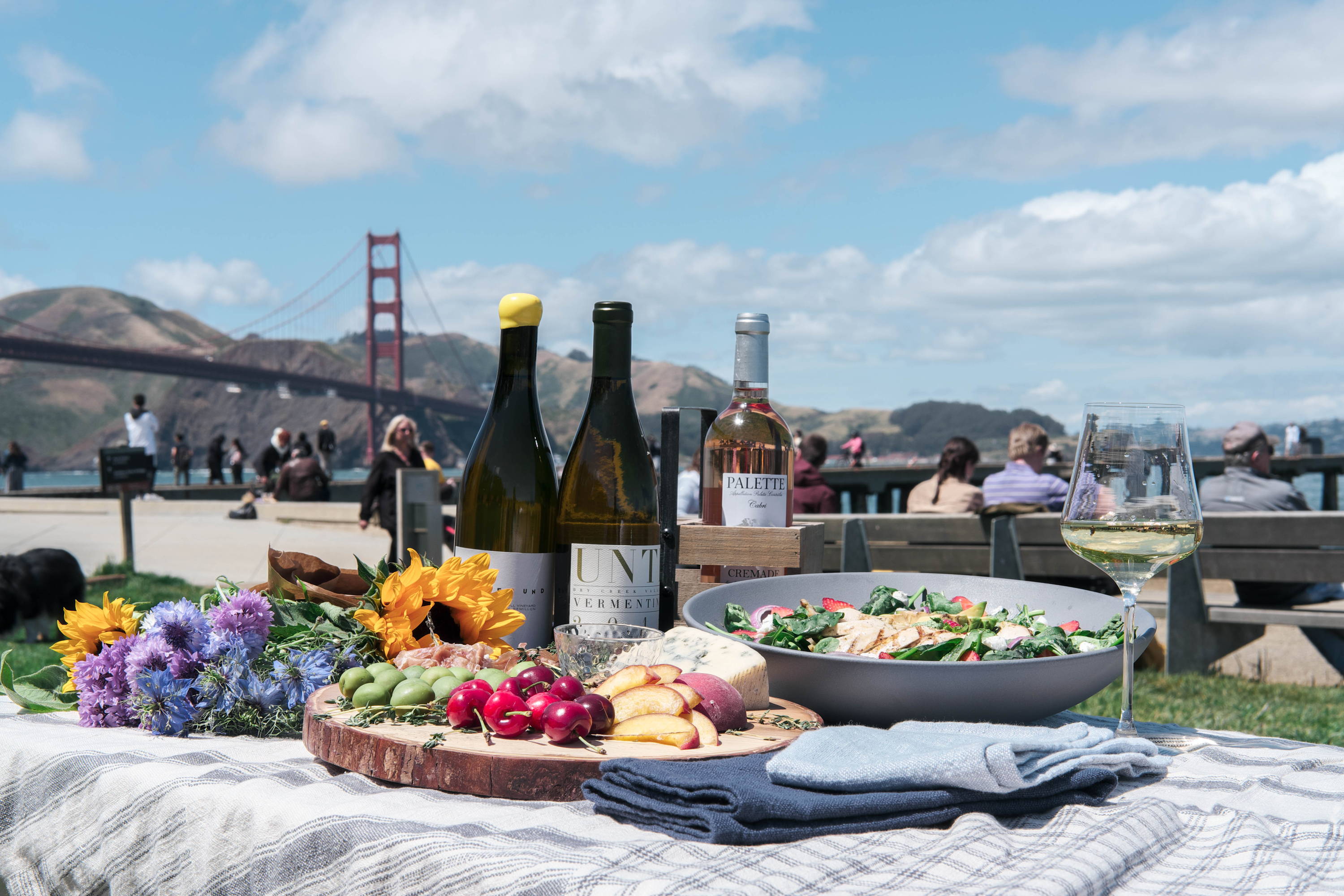 What does a summer day spent sailing on the bay feel like? With the wild sea breeze in your hair, the salty ocean spray kissing your face, and the warming glow of sun peeking through the clouds? I’ll tell you what it feels like - it’s the exact same feeling you’ll get from the first sip of a perfectly chilled glass of my new favorite Vermentino.

Here’s a wine that embodies San Francisco summer just perfectly. It’s not a tropical summer vacation in a bottle - with overripe mangoes and pineapples or sweet vanilla - but rather a wine that’s zippy and refreshing as the fog rolling in at four o’clock, with flavors of California citrus - Meyer lemons and homegrown limes, aromas of white blossoms in full bloom along the sidewalks of every neighborhood, and like that first bite of summer stone fruit from the farmer’s market. This wine welcomes the arrival of summer in a way that’s distinctly homegrown, and if you ask me, it would pair perfectly with: 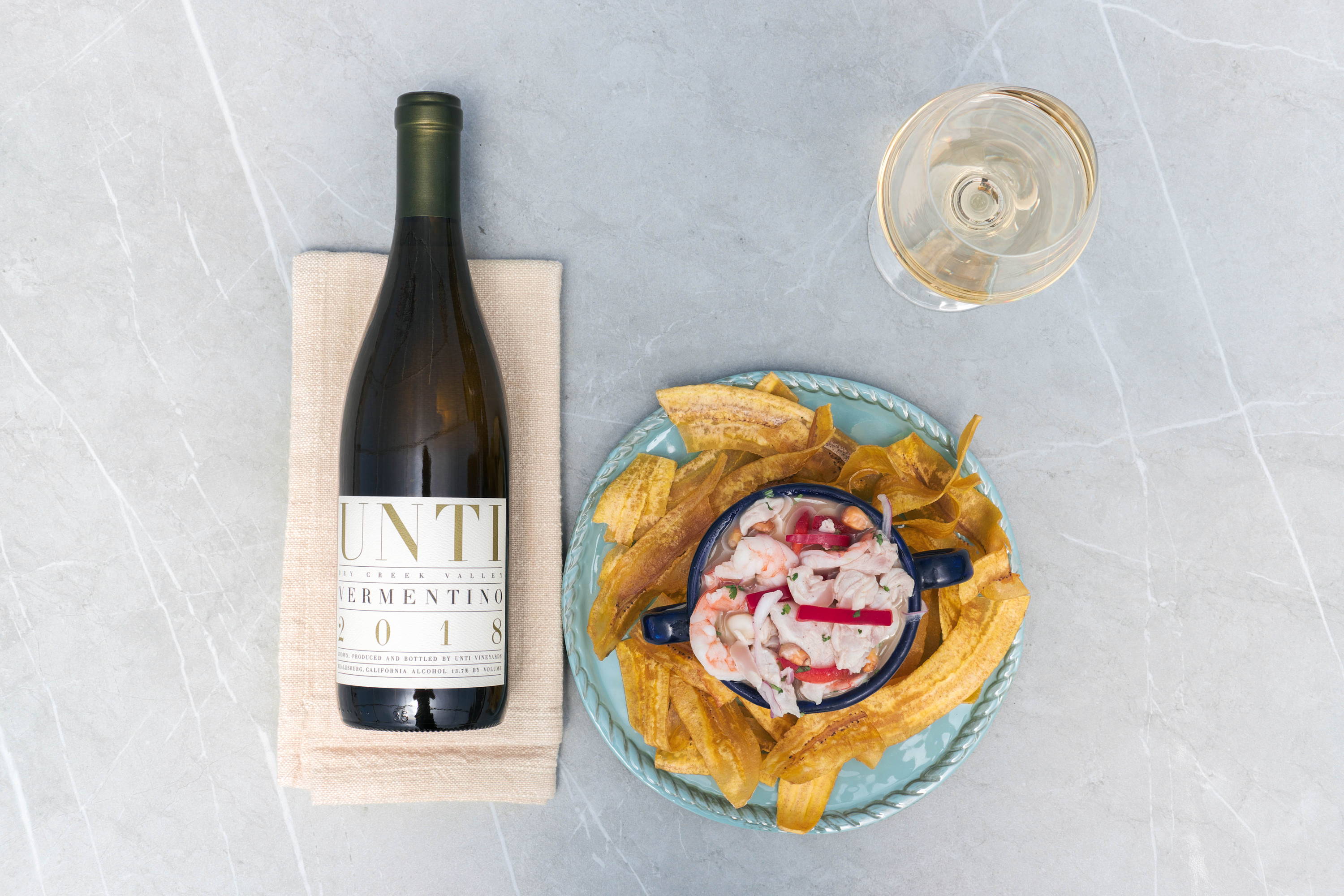 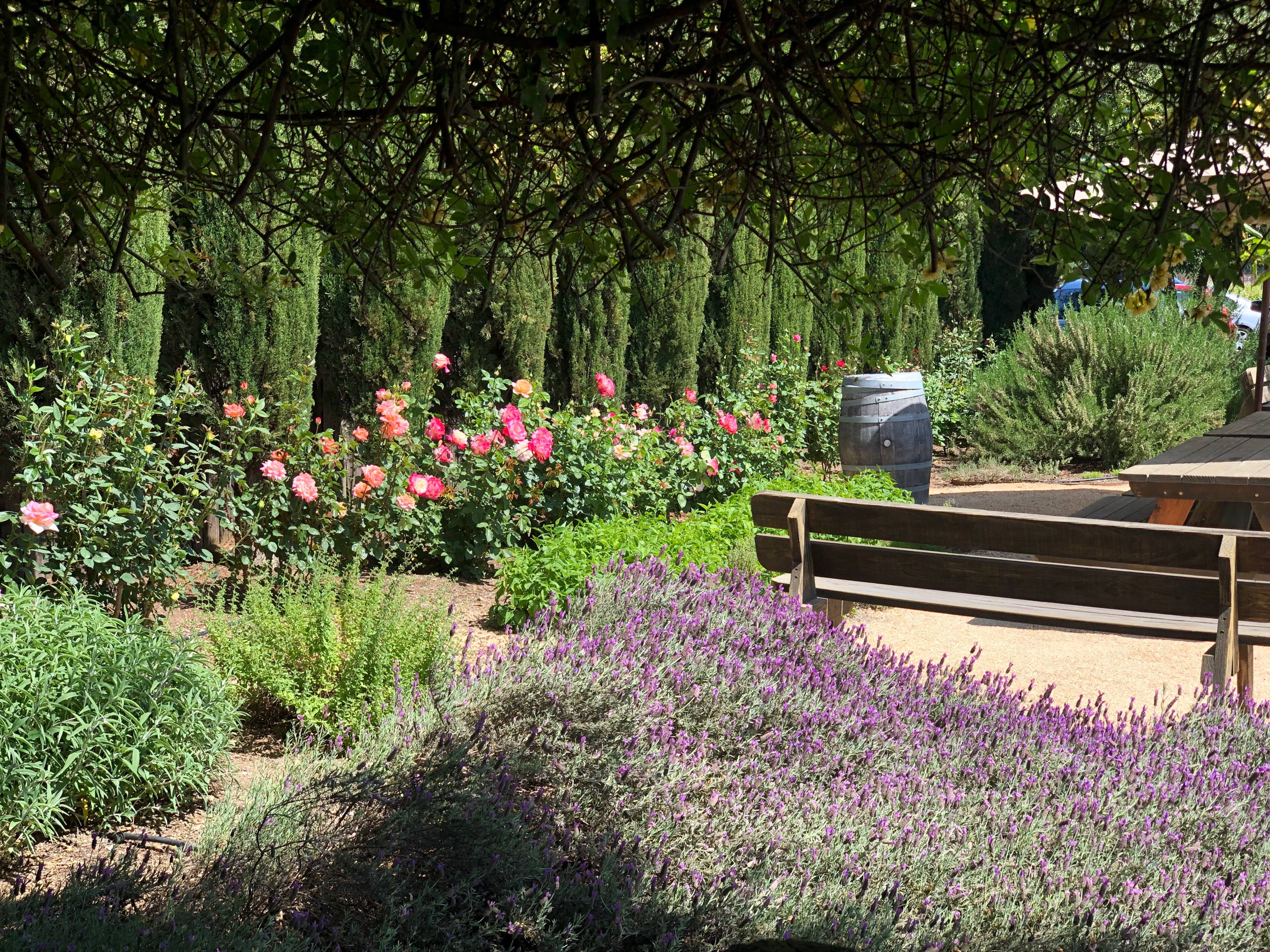 ‘Experience, travel – these are an education in themselves.’

It’s always easy to stay put, to do what those around you are doing, and to never question the norms that comfort you. Familiarity tastes good and traditions are well-trodden paths that leave little chance for getting lost. But what’s the point of life if it isn’t to learn, to explore, and to follow the path less traveled?

And so we have the story of wine-loving George Unti. Born in Fort Bragg, California, he spent his early years split between Fort Bragg and Madera, where his parents were farmers. After graduating high school he got his first job with Safeway, with whom he spent the next 39 (!!) years moving up the corporate ladder. But after a few too many years behind the desk, he yearned for something different - something more in tune with the land, like he had known as a child, and perhaps something more in line with his growing love for European wines.

In 1990 George purchased a property in the Dry Creek Valley of California - a region known primarily for Zinfandel. The idea wasn’t to create a business right away, but to learn about the region, experiment with the vineyards, and well, take a bit of a risk if he could afford to. Around the same time, he visited Italy to spend time with his cousins and drink as much of his favorite European wines as he could muster. What he couldn’t help but notice was how good grapes like Sangiovese tasted in Italy, and how far a cry they were from the cheap Chianti Classicos (ironically poured out of straw “fiasco” bottles in the US) you found at Italian restaurants in California. If grapes like Sangiovese, Montepulciano, and Barbara could thrive in the warm Mediterranean climate of Italy, then why couldn’t they also be successful in California? Why should he limit himself to the grapes that his neighbors in California were growing when there was a chance to try something new? And furthermore, California’s cool evenings should allow for wines with at least as much balancing acidity and aging power as Italy, so what if he didn’t just match the great wines of Italy, but try to surpass them?

Perhaps fueled by the liquid courage of so many Italian wines, George returned home to California with a mission to do what no one around him was doing, what he’d never seen before, and what was unlikely to work at all - to plant Mediterranean grapes in California terroir, and simply see what would happen. His eyes had been opened and there was no looking back. 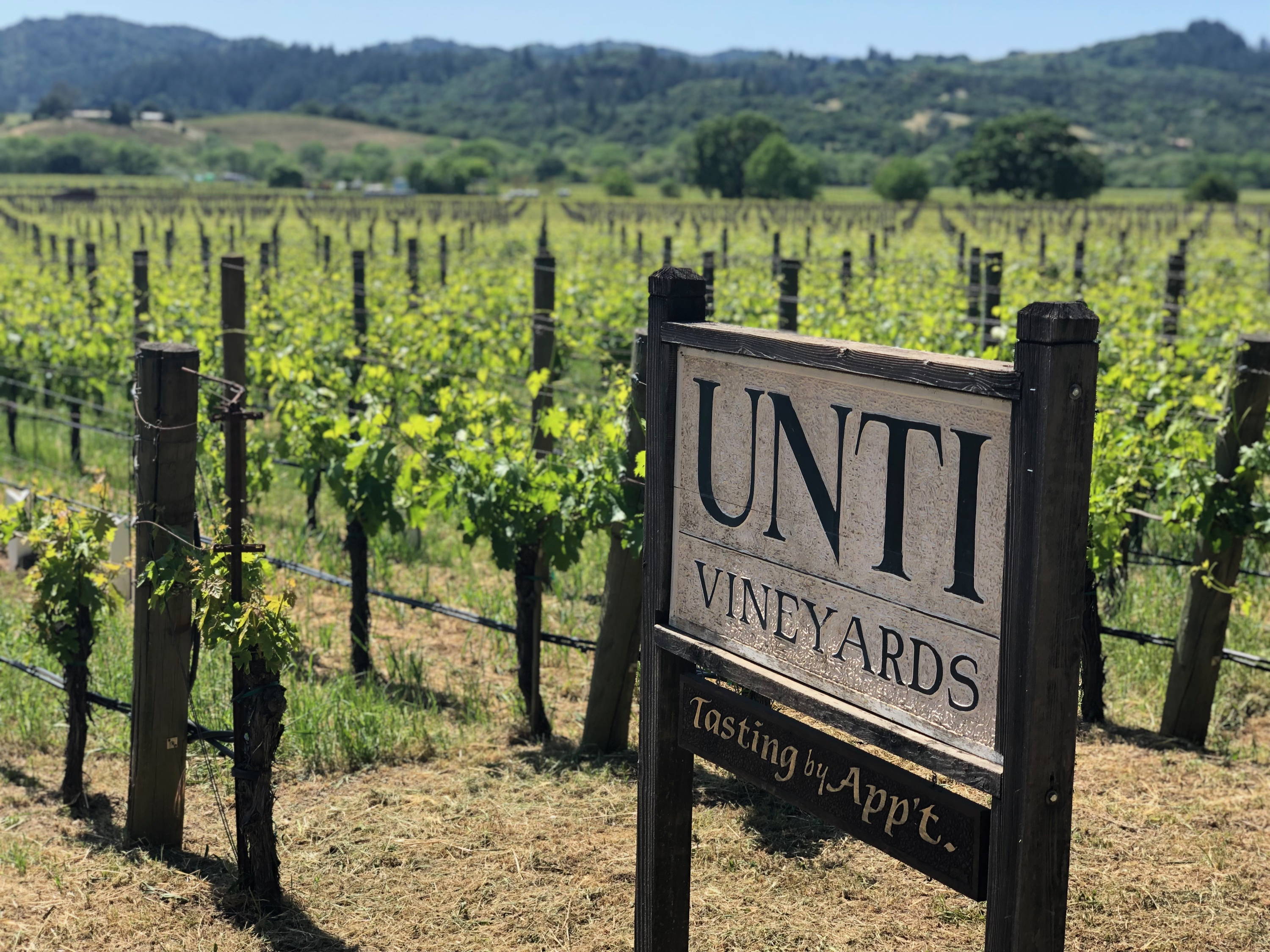 Fast forward to today and Unti is known not only for producing some of the most interesting, balanced, and down-right tasty Mediterranean style wines in the region, but for doing it in a way that is sustainable, organic, and forward-thinking. It seems George’s journey into the past paved a new path forward for his entire family as well. George’s son, Mick Unti, walked into his father’s world of wine with an eagerness to get his hands dirty as well. He took his father’s love of Italian wines and added to it his own love of southern French grapes like Syrah, Grenache, and Mourvedre.

“A complete wine has beautiful aromas, some modicum of mouthfeel or texture, and there has to be structure - I crave it. If it’s a white wine it comes from mostly acidity, if it’s a red wine then It better have some tannin and acidity. If we can’t do that… then we don’t make that wine anymore.” ~ Mick Unti

Together, this father and son team simply refused to accept what’s been done before and stay within the mold of the community around them. They are travelers at heart, with open minds and open hearts, and of course, a hearty passion for a great bottle of wine. 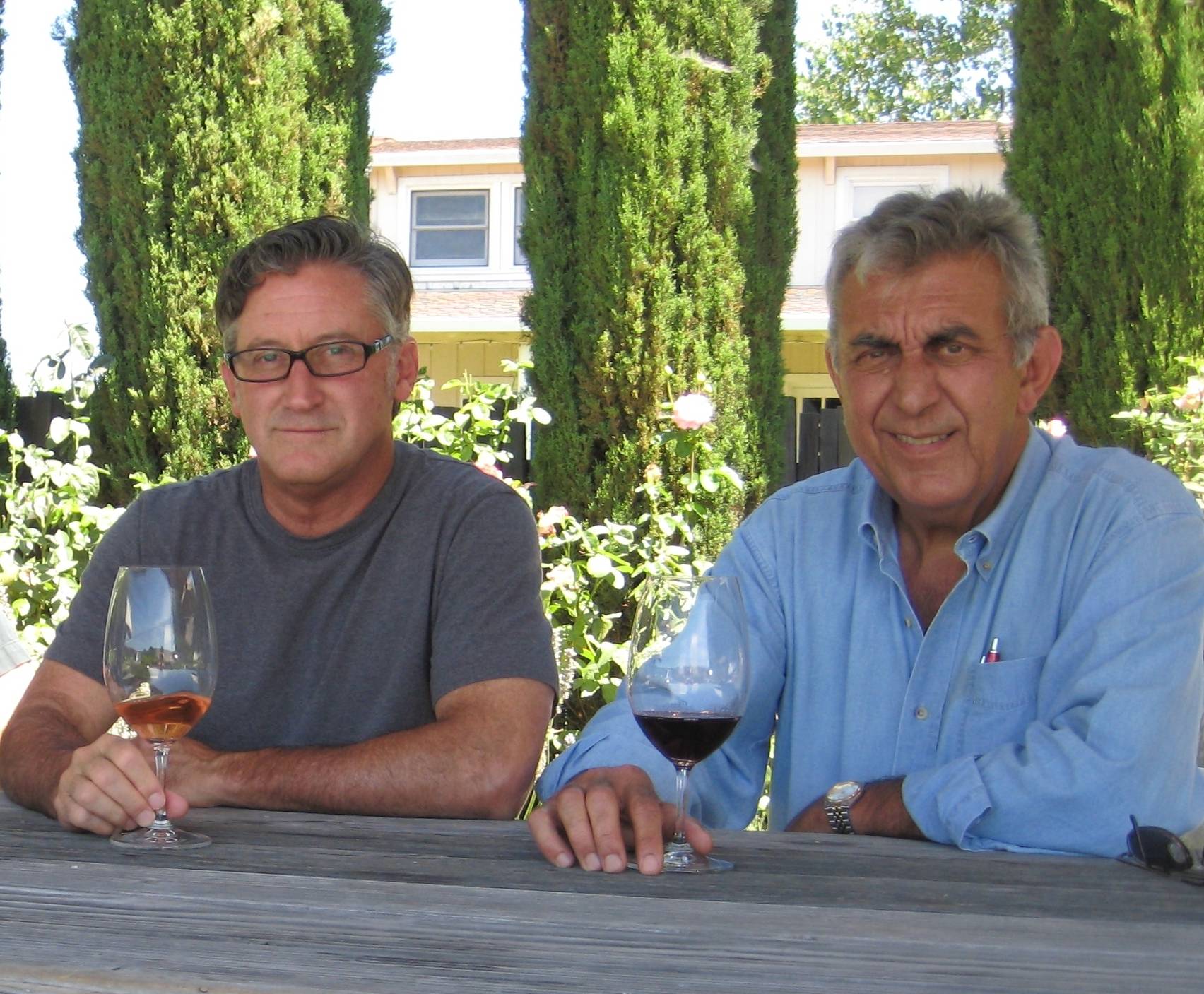 “You appreciate the personality of flavors that come off your own vineyards. That’s one of the most fun aspects of being in this goofy business for 20 + years. Best part of being a producer is discovering these little nuggets about your vineyard, not just following a formula... Typically Vermentino is more floral and fruity. It’s starting to emerge - those floral and fruity grapefruit qualities. The mid-palate has texture and body, but the finish has racing acidity like a Loire valley white. We have an opportunity to make Loire valley like Vermentino that we don’t have to do anything to. It’s like Arya in Game of Thrones - it’s got a little mask on it trying to fit in with the loire whites." ~ Mick

Our featured wine, Unti’s Vermentino, is from the original planting in 2004 and a couple of small vineyard blocks planted in 2010 and 2016. When they first planted Vermentino they had no idea what would happen. Would it turn overly fruity in the warm California sun like so many Sauvignon Blancs and Chardonnays do, or would it maintain that vibrant fresh minerality and acidity that makes Ligurian and Sardinian Vermentino sing? Lucky for us it was surprisingly the latter. This grape feels alive in the glass and seemingly captures that spirit of optimistic energy that George brought home with home all those years ago. 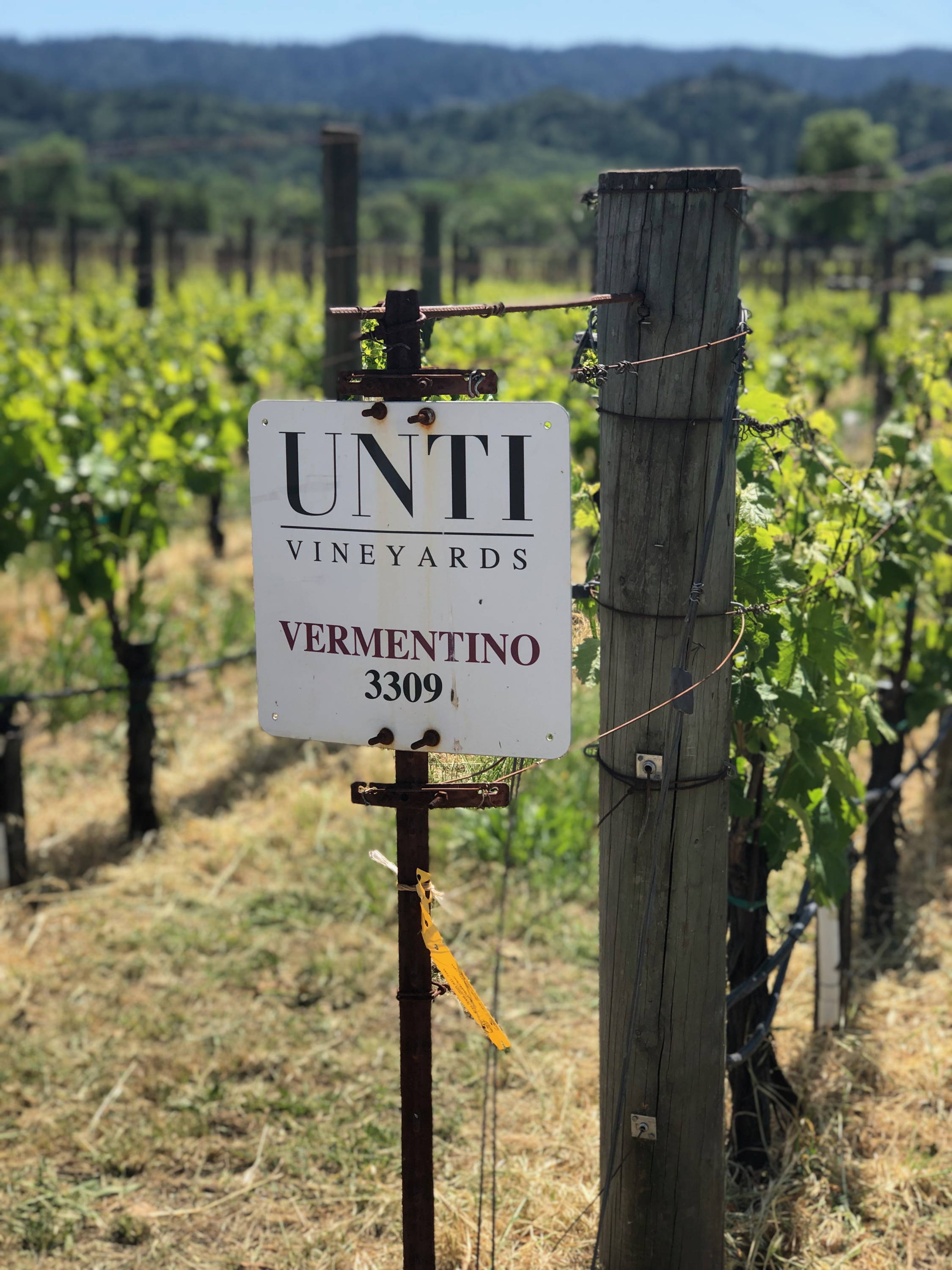